Jack talked me into fishing this tourney finally after a few years of trying. usually it is easy to do, but the catch is, I would have to find another partner and would have to fish against him (ulp) because he has been fishing it with his regular partner Wayne halvorson for 10 years now.
I don't have a boat in working order now so I tried to get a couple of guys with boats interested with little luck. I pretty much gave up, when i was at a Thorne brothers seminar I saw Kyle Sandberg, and he was talking to someone about his boat, so I ran the idea by him, he didn't think he could, but he called me the next week and said he wanted to, so I let him get us entered and all, since he lives close to the bait shop. We didn't get to prefish at all because I had to work and he was going to school, but I fished with Jack a few times earlier in the spring and had a pretty good idea where i wanted to fish.
We got the boat in and got to take off 29th, Kyle has a nice boat and it is fast too, we got to the first spot in no time.
My game plan was to fish some humps out in the middle of the lake that top out at 5 ft. The wind was blowing pretty hard and I wanted to move along the edge of the breakline and cast up onto it, hitting pockets of weeds and hard bottom where the large slabs were scattered in verious spots. It took me only 3 minutes to relize it was not going to work, with the extra wide 17 ft boat with a tall windshield and only a 55# thrust bowmount, the wind pretty much had its way making pin point boat control impossible.
We soon gave up on that and tried throwing an anchor, that didn't work, it didn't hold at all, threw out the other one and it finally held after some drifting.
We tried that a couple of times but after an hour of struggle and not a bite I completely lost confidence in fishing out there, I decided we better get out of there and try to get out of the wind.
I wanted to try a bigger bay with a point that came out into deep water with a small hump on the end that me and jack fished a couple of times earlier this year. there was not much there at that time, but with the weeds coming up, I thought it could be good.
We got there and found it pretty windy there too, but not impossible at least. and it was raining ice pellets too, then the sun would come out.
We got on top of the hump and I cast a paddle tail under a float off the drop off on the end of the hump, and it went down right away. it was only a sunfish, but that was a good sign. there should be weeds and bugs, and hopefully crappies. We anchored up on top and casted out over the edge with our floats set around 3.5 to 4 ft down . I nailed a couple more 'gills, and then the first crappie!
I got a couple more keepers, then the bite quit.
We then pulled anchor and moved around with no action so we decided to got right back to where we had the first fish. I switched to a 1 inch gulp alive minnow, and go a nice slab right away. Kyle switched up and got a good one too. It was on and off but pretty slow. We tried repositioning the boat, and I put on a tiny northland mimmic minnow fry in perch pattern, and that really got em going. Kyle was trying some bigger plastics and a small spinner bait with no bites. I suggested he try something smaller and he put on a 1 inchgulp minnow, and soon got a nice fish. with time running out I wanted to get the boat on top of the end to try some jigging. We found a nice area of standing weeds that were holding our fish. we were positioned good for my to fish off the deep side, and started nailing fish, one big one then a bunch of small ones. Kyle stuck with his float casting to the shallow side of the weeds. he noticed hit float lift slightly and set the hook, he got it to the boat and I got it in the net, a big mule crappie at 1.55 pounds, that turned out the be the second biggest fish of the contest!
Soon we had to get in for the weigh in. Jack and Wayne were at the dock, they stuck it out in the middle of the lake and it paid off, they ended up with 10 fish that weighed over 11 pounds! We had 10 for 8.75
He beat us by over 2 pounds! I thought we wouldnt even finish in the money, after seeing Jacks fish, thinking othered must have got into the mules too! there was no need to be concerned, we ended up second! Way better than I thought we did!
It was a fun event (once I got out of the wind) and had a good turnout of 100 teams. I will have to make this a annual even. I am glad it is the only time I have to fish against Jack this year!
BJ'S Bait and tackle crappie tournament Top 15 catches 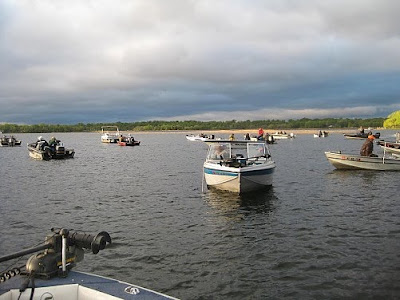 we were waiting to hear 29! 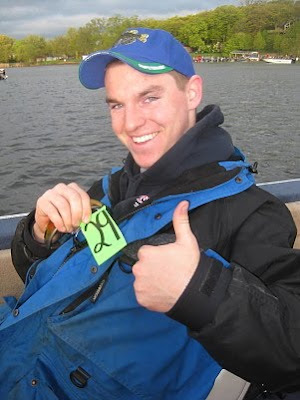 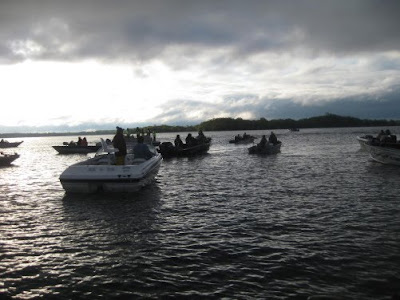 got this big one, but it is the wrong species! would have been nice for the UPL though! 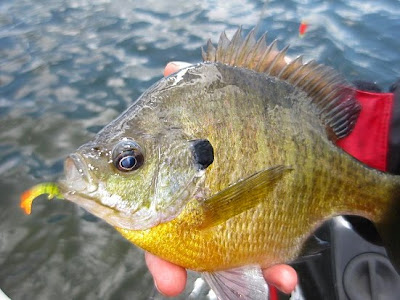 Kyle with his big slabosaurus 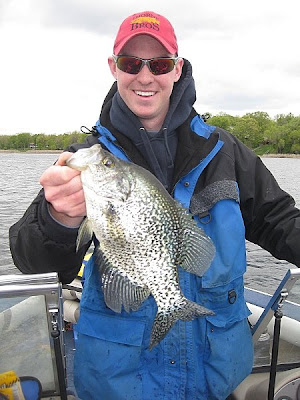 i meet jack at the dock, one look into his tank revealed he beat me good! I was not suprised. 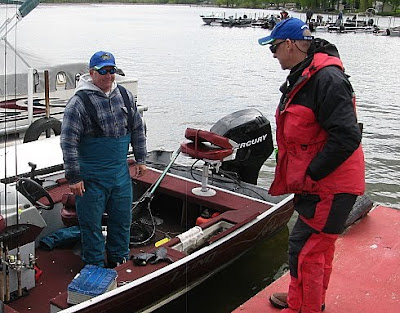 Jack and his catch. I will get him next year hehe! 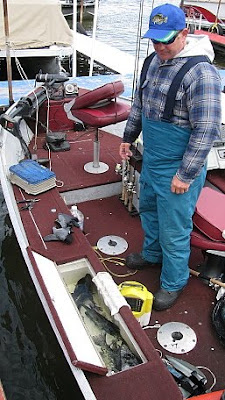 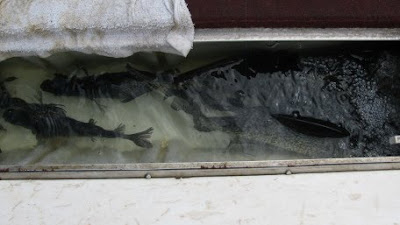 Long line at the weigh in. many were dressed in their ice fishing suits to fight the cold wind 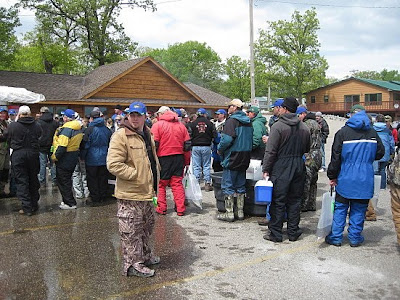 Bucket of slabs getting the weigh 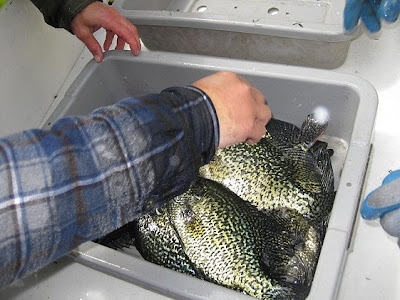 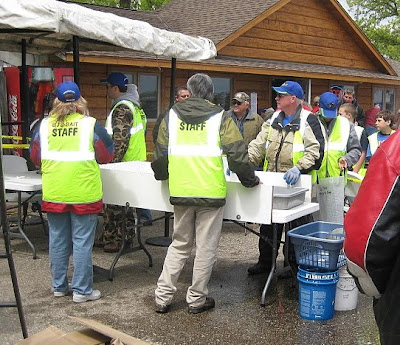 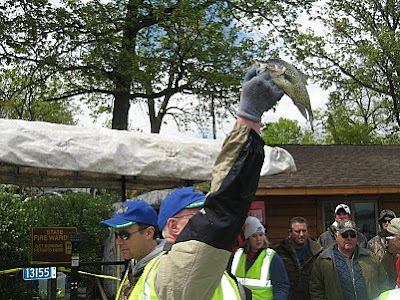 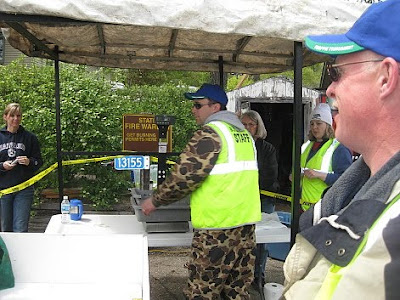 waiting to hear the results 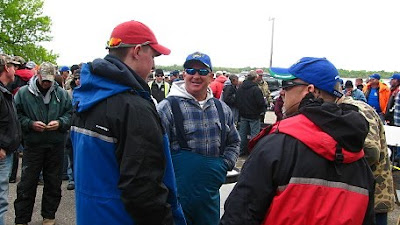 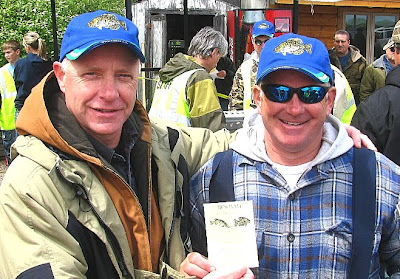 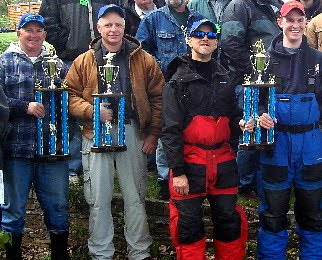 Posted by Michael Thompson at 4:28 PM

So you got 2nd Big Fish and 2nd Place for the tournament? Or are those two the same thing?

Jack got 1st place, right? Has Jack ever won it before?

Pete was so happy about your finish that he called to tell me about it.

yes, 2nd for big fish and highest weight, jack got biggest fish and won biggest weight. when you split up shake and bake, one of us has to lose i guess, I hope to win it next year though!

Good job boys, nice to be "in the money"!

Michael Thompson
Pics and stories of my angling adventures as I chase fish all over the state, my favorite is Panfish, but I will fish for whatever is biting, and where ever fish are biting, thats where I'm gonna go!